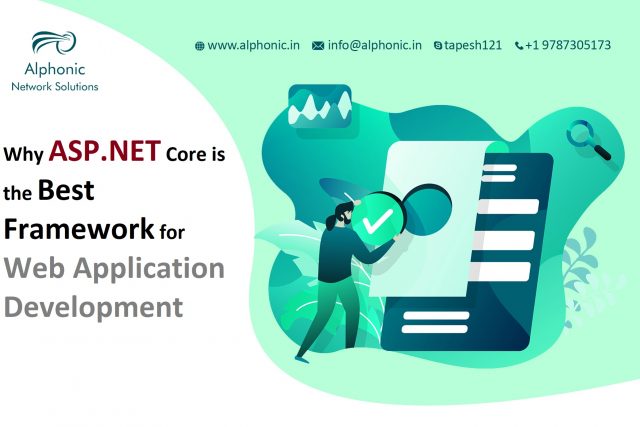 Gone were the days when businesses used to have limited technologies for the integration of desired features and functionalities of their choice in their business applications. With continuous growth in web application development, business enterprises now have many ways to streamline their business processes and explore some better-growing opportunities. As there are wide choices of technologies and frameworks available for web application development, the latest versions of .Net are paving their way in the market of web app development.

The evolution of web applications has seen rapid growth in the last few years as there is a wide range of options are now available to choose from for web development services. But still, there is great uncertainty about which platform soul be used for web app development?

The earlier version, ASP.NET4.x was also a huge success for the developers, but the new ASP.NET Core update has completely changed the architectural structure of web application development.

An Overview of ASP.NET Core Framework

ASP.NET offers a simple and powerful way for web application development and its top-class features have been attracting developers from every corner of the world. This high-class cross-platform architecture is used by most of developers for easy .NET Core Web Application Development. Paving its way as a simple and easy-to-use framework for web application development, ASP.NET is a powerhouse of some of the greatest and latest features to gain popularity among the developers.

Now many of you are wondering, “Why are ASP.NET core application development services catching the hype? And why are tech stack companies leaning towards hiring ASP.NET developers?” The simple reason is that .NET always brings the best for online app development.

According to a survey report, ASP .NET Core + MVC .NET + AJAX .NET occupies almost 40% of the market, which ultimately means that Microsoft is dominating the web application market.

Well, this is not that surprising, as .NET software always gives you vast capabilities at various levels of complexity. Right from creating simple and fast web pages to building high-performance REST-based APIs for leading enterprises, .NET has turned out to be a powerful yet multi-purpose tool.

Before hitting the list of perks that ASP.NET Core adds to your development process, let’s take a sneak peek at this web app development framework.

An Overview of ASP.NET Core

ASP.NET Core is an open-source, cross-platform framework that has been widely used for developing internet-connected, cloud-based modern web apps.

With the initial launch of this framework in 2000 by Microsoft, this technology was basically used for Windows. Over time, it has grown as a core powerhouse of advanced features that make it easier to build programs and develop applications.

Developing useful web applications, mobile apps, and IoT apps has become far easier now with this framework, as it comes with several benefits ranging from high performance to security, low coding, and more.

Why Are Big Businesses Turning to ASP.NET Core Web Solutions in 2021?

Since ASP.NET Core application development is cost-effective and super fast, it has been widely used for creating enterprise-level web applications. Currently, there is a huge number of web app development companies that choose ASP.NET Core as their preferred web development technology. But the question is “What makes this framework stand out from the crowd?”

Let’s take a look at the elements that make ASP.NET Core the right choice for enterprise app development.

If there is one thing that developers hate to bother with, it is indulging in the complexity of coding and handling projects with large loading times.

ASP.NET Core development can free you from all these hassles, as it allows developers to write less code and have more functionality than the available technologies.

So if you are planning to develop complex enterprise applications and looking for the right technology that will help you market your app quickly, then ASP.NET Core is the right choice. With this framework, it is easy to write complex codes using ASP.NET intellectuals, as it has built-in intellectuals that automatically rectify the errors in advance and make the entire coding process flawless.

When it comes to web app development, it is essential to ensure that the application actually supports all of the platforms. The modern ASP.NET Core is actually a cross-platform framework that allows you to easily build web apps that seamlessly run on multiple platforms, including Windows, Linux, or Mac. In simple words, this framework features a Visual Studio IDE that allows .NET app development companies to build web applications on any operating system of their choice.

This feature makes it an excellent choice of framework to develop cutting-edge web applications. The best part is once the app is developed, it provides you with the option to reuse the same code again for application development for any choice of platform.

You can choose to hire a web app developer, as these features of ASP.NET Core make this framework superior, more efficient, and faster for building robust and modern web apps.

When it comes to building web applications, the simplicity of coding is the only key to successful ASP.NET development.

And ASP.NET Core ensures easy customization of web apps with your choice of features and functionalities. With ASP.NET Core, coding, compiling, and testing something either in a model, view, or controller is far easier for developers to manage.

Gone are those days when developers worked with classic ASP.NET and had to worry about IsPostBack and ViewState. By hiring a cross-platform app developer, you can develop web APIs and web applications that are testable in a better way by achieving a clear separation of concerns.

While getting started with web app development solutions, app security is one of the main concerns of businesses. And with the increase of hacking and malware, this issue is getting more and more serious and highlighted among businesses.

So if you’re afraid to hire web app developers and are concerned, then you must know that the redirection of HTTPs was known to be the key, as it protects against SQL injection and CSRF. But now the architecture is modern and different with microservices and REST APIs.

However, .NET offers you many easy-to-use mechanisms for authorization, attack prevention, data protection, and authentication. ASP.NET Core helps to integrate apps with all the external providers.

So when you are developing your business web app with ASP.NET Core, security can be easily extended to the next level.

No matter what type of app you are planning to create by hiring a dedicated web app developer using ASP.NET Core, developers can leverage built-in dependency injection. In other words, you don’t need to rely on third-party frameworks like Ninject or AutoFactor anymore to distinguish between the different pieces of your apps.

With ASP.NET Core, software development companies are no longer limited to web applications, as they can leverage new libraries in more event-driven apps such as AWS Lambda or Azure Functions.

The built-in dependency injection of ASP.NET Core actually improves the testability and extensibility of the web apps.

The Key Take Away

ASP.NET web application development was mainstream for quite a while on account of the dependability and solidness of the innovation. In any case, today, the system is at this point not in help. It was supplanted by state-of-the-art ASP.NET Core that offers engineers a ton of benefits.

ASP.NET Core has altogether further developed execution and versatility. It upholds cross-stage advancement and needs less code and support. Web applications that were based on ASP.NET Core are safer and effectively mobile.

How Much Does It Cost To Hire PHP Developers In India

5 Things To Consider Before Hiring A Fintech App Development Company