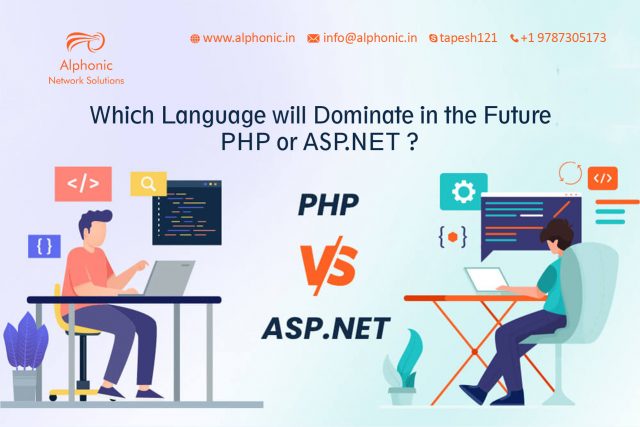 There have always been conflicts when choosing between ASP .Net and PHP for web development. What do you think is better? If you ask programmers, they are confused again because they are not sure which program is easier to work with or which offers more functions for web application development. The debate is still going on.

PHP is one of the most widely used programming languages ​​and developers are addicted to it. On the other hand, we have the ASP .NET language which Microsoft uses as a backup carrier and which can be run in any supported .NET language.

But the final decision is yours. When you need a project, you need to decide whether PHP suits your needs or whether you need to develop your project on the .NET platform.

So, here we look at the features and benefits of using both so you can decide which one is right for your project:

PHP is a hypertext preprocessor language. It has won all hearts online because of the great learning curve it offers. It also has a large developer community to follow.

PHP vs. ASP.NET: What to Choose?

Both PHP and ASP.NET are widely used. They are used by many developers, which makes it difficult to select new developers. On the one hand, PHP is a general-purpose programming language that developers rely heavily on, and on the other hand, ASP.NET has a brand like Microsoft associated with its name.

However, in this article, we’re going to talk about each of the programming languages ​​separating terms to better understand and discuss which ASP.NET or PHP is better.

The benefits of using ASP.NET web development include the flexibility to add and remove features as needed, ease of installation, open source and multi-platform frameworks, and compatibility with other .NET frameworks. Microsoft claimed to be quickly becoming a very popular framework like Ruby and Node.js.

However, ASP.NET has drawbacks that can make its popularity a slow trend. This framework has problems with ease of modification, document gaps, lack of support tools, and lack of key functionality due to its grossness. Of course, ASP.NET developers can use third-party tools and methods to solve these problems.

PHP (Hypertext Preprocessor) is a general programming language that can be used to develop dynamic and interactive websites. It was one of the first server-side languages ​​to be embedded in HTML, which made it easy to add functionality to web pages without having to contact external files to get data. Its use has evolved over the years, with regular upgrades (version 8.0, released November 2020) adding features and unlocking new features.

Developers prefer PHP for all of the advantages it offers, but they cannot ignore its disadvantages. The drawbacks of this framework are slow implementation, inability to resolve some issues, and the time it takes to get it.

Side by Side Comparison of ASP.NET PHP

Both ASP.NET and PHP web app development are highly scalable languages. More important for scalability than the language you choose is the development talent you use. You need to consider the status of your company.

Obviously, if you are a DIY entrepreneur and want to participate in developing with Drupal, PHP is preferred by ASP.NET because it has the lowest learning curve.

When looking for a top developer or development team to build your website, bow to the best talent available. Whether this talent works in PHP or ASP.NET should only matter if your company culture moves towards using one language or another.

While PHP critics point out that this language is a tougher language than ASP.NET, if you hire a PHP programmer it will appear as a weakness in the overall framework of your website.

Also, the fact that ASP.NET is a much stricter language than PHP web development doesn’t mean you will automatically find better talent in the ASP.NET development suite.

PHP is open source and the pool of developers is much larger than ASP.NET (based on Windows). It has been said that both vibrant communities are regularly published in online forums, so if you are looking for a problem, you probably useful for both societies.

However, while the ASP.NET community contains dedicated developers, there are many shareholders that are ready and are able to release the forums and answer questions about ASP.NET challenges. On the other hand, PHP is a large-scale language, where there are many friendly developers in a variety of advice and guidance for people who ask forums. The biggest meal here is that while they are likely to be able to respond to your questions in both societies, as soon as they work in the PHP associations, it will be almost faster.

This is the only area where PHP has a particular advantage over ASP.NET. PHP is open source and therefore completely free, while ASP.NET is owned by Microsoft and has the cost of web hosting.

However, the cost of these costs shouldn’t be so irreversible that it would deter you from becoming part of a third-party ASP.NET developer company if you are already planning to develop the project.

It should also be noted that PHP can be used on Mac, Windows, or Linux devices, while ASP.NET development services only run on Windows devices. However, if you are using a Mac or Linux, you can use the Mono project to use ASP.NET.

Thanks to the worldwide popularity of PHP as the dominant web development language, it has a large developer community. The PHP community is clearly much larger than the asp.net community.

However, since not all PHP developers have the same experience and expertise with every PHP framework, finding the right framework specialists can often be a challenge even for PHP developers. On the other hand, asp.net, a completely secure framework, offers extensive and organic support for all asp.net developers. Unlike many developer-developed PHP frameworks, asp.net relies entirely on the MVC and WebAPI protocols to stay self-sufficient.

In fact, any web technology can be a great option for a project if it meets expectations. By providing a comprehensive answer to the question “Why use ASP.NET for web development?”, We want to highlight the most important things to keep in mind.

First of all, ASP.NET is a mature framework that has been around for decades. Compared to other frameworks, it has gained a decent market share and is further improved through continuous development. The current community includes more than 60,000 developers from around the world. Although it is an open source framework, it is heavily endorsed by Microsoft and is known for its active community support. This close collaboration allows easy access to various libraries and clear instructions. Microsoft invests significant resources in developing its operating systems and in supporting the community. Don’t worry that they might suggest ancient methods.

In addition to technology, ASP.NET is often selected due to fast and effective performance. The Assembly should only be once if a .NET platform can do the translation symbol repeatedly. Compared to the compromise law that should be done every time the device is done, it is more compatible and compiled. Expansion is a fantastic professional performance. It improves code, as well as architecture and infrastructure, including grip, network and so on.  This framework receives its vertical expansion that focuses on reducing general delivery time.

One of its special features is the power of security. This web application framework supports all required authentication protocols. ASP.NET offers a number of built-in features to protect public applications, as well as on-site scripting and request forging. In addition to multi-factor authentication, this framework takes on this externally, for example in Google.

Previously, developers had to buy IDEs in order to write code. Free tools and libraries are available to everyone today. However, it is common for professional development companies to pay additional permits for more employment. In addition, all web applications require hosting servers. Windows hosting is more expensive than Linux servers. There is also free Microsoft IIS for different versions of Microsoft Windows.

While the answer may seem easy to simple, we’d like to be more specific and outline all the pros and cons of this development approach.

The main reason for using PHP for web development is that it was originally introduced as a web programming language. This program is heavily supported and improved by the private community of over 5 million PHP developers. The open source programming language is very popular with newbies and has gained the largest market share. The support community has been growing for more than 25 years.

Working with open source has its advantages and disadvantages. In fact, it is easy to learn, compatible with different servers, and suitable for a wide variety of web applications. Another distinction is the interpreted PHP code development. This type of code is usually executed on the server, then built in HTML, and only then sent to the user. Accordingly, the runtime is longer and some errors can occur when importing large files, resulting in lower performance compared to other languages. On the other hand, PHP web development is often chosen for greater scalability. This is achieved by adding more servers. The overall workload is shared between them and more user requests can be processed. This approach is based on horizontal scalability, which is different from PHP and ASP.NET.

Having various in-assembled security highlights, PHP is as yet viewed as less secure contrasted and other web-worker programming dialects. While acquiring greater adaptability recorded as a hard copy the code, engineers have more liabilities to get it and can’t depend just on the in-form instruments.

Lower improvement and upkeep cost is generally recognized as an extraordinary advantage. PHP engineers approach all the instruments and libraries with no extra charges. In addition, designers can pick among the distinctive facilitating administrations and have the chance to save money.

This mobile and scalable programming language can undoubtedly meet the essential requirements for web advancement. Nonetheless, the organizations need to layout their necessities right away and ensure it relates to the put-out prerequisites and last objectives.

PHP is the world’s generally utilized and famous language on the web is helping the designer with a great deal of uses. Its people group is huge and unreservedly accessible on the web. The designer can begin working with PHP in a lesser time since it’s simpler to learn. It is an open-source stage, in contrast to ASP.NET, which is a paid Microsoft stage. PHP is a blend between a programming language and a web system, while ASP.NET is a straight application structure.

An ASP.NET system has the most stunning arrangement of libraries. It accompanies many elements, subsequently permitting an engineer to make a site with its inbuilt and drag-drop highlights. This load of characteristics accompanies a sticker price as a permit expense. PHP engineers do not have the choices to work with generally utilized web systems like ASP.NET. A developer can compose code in any language like C#, VB, and F# inside the ASP.NET environment. Yet, developer comes up short on the choices to compose code in PHP. Subsequently, PHP empowers engineers to compose an application in adaptable ways by permitting them to browse a wide scope of web systems.

How to Hire Node.js Developers in 2023 – Everything You Need To Know

How to Build Real-Time Apps With Node.js

How to Develop Banking Blockchain App